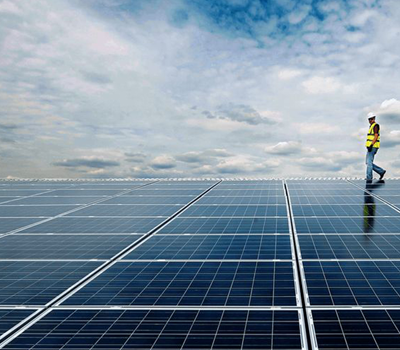 In this solar system, solar inverter converters the DC electricity produced by solar panel into AC electricity, which can be used directly at home as well as business. However, grid tied systems do not work when there is NO grid. If the electricity produced by the solar panel is more than your connected load then the surplus will be fed into the grid, which would be adjusted (please check with your power distribution company) in your next utility billing cycle through solar net-metering system.

Off-grid solar power system – also known as a stand-alone power system. It works by generating electricity from solar panels and using it to charge a solar battery via a charge controller. That electricity is then converted using an off-Inverter as so that it can power home or business appliances by saving the electricity in a solar battery, it is possible to run home with solar energy, even at night or during times when there is less sun exposure.

Off-grid systems are used by those who wish to generate and supply uninterrupted power for self-consumption and/or location in remote areas with no or minimum access to the utility grid. Off-grid solar system can facilitate independent, long-term and sustainable solution.

A hybrid system brings the best of both worlds and is a combination of an on-grid and off-grid hybrid system have a battery backup which helps store the generated energy. What differentiates hybrid systems from Off-grid systems is that, once the battery is fully charges, any excess power generated which is not being utilized will be fed back to the grid and you will get suitably compensated. Even during a power-cut your hybrid system will work independently as an off-grid system and in regular mode will work as on-grid system.

It’s not what you reach your goal , it’s what you conquered. That’s what defines your career.